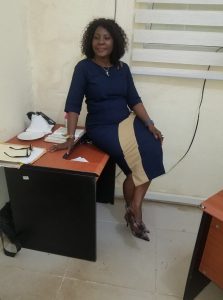 Broderick graduated  from the B.W. Harris Episcopal High School in 1979 where she did broadcasting as elective. Prior to earning her diploma, she was vetted and recruited by ELBC (now Liberia Broadcasting System – LBS) to work as continuity announcer. Driven by passion and desire to excel in the practice, Annie worked her way towards doing programs and eventually news reading.

Besides working for the state-owned radio station, ELBC (now LBS), Broderick worked as Editor-in-chief of the Herald Newspaper, and prior to this time, as News Director/Director at ELCM now Radio Maria of the Catholic Church in Liberia. In addition, she worked as a cadet in the Ministry of Public Works before graduating from the Mass Communication Department.

She also relishes in the opportunities she had to interview then Israeli Prime Minister, Yitzhak Shamir, and former Liberian President, Samuel K. Doe.

A year after she entered the University of Liberia,  Annie won the Miss Liberia crown in 1983. In the same year, she participated in the Miss World pageant where she was given the title, Miss Africa Queen of Beauty after coming fourth place.

After earning her undergrad diploma, Broderick pursued and earned a second bachelor in law (LLB) from the Louis Arthur Grimes School of Law at the University of Liberia.

Annie Broderick currently works as Assistant Hearing Officer at the National Elections Commission where she handles cases on inter and intrastate party disputes between and among political parties; along side disputes emanating from election complaints. Annie’s success inspires our female students, letting them know that they can break through the gender constraints imposed by the social structure if they only stay focused and determined.

We are proud of Annie Broderick’s accomplishments and are also proud of our connections with her .